Scheduling for fixed-route services – and especially the creation of optimized crew schedules – requires compliance with meal and rest break rules. This is no trivial feat: vehicle and crew scheduling is a complex problem called NP-hard in computer science, and it requires the use of advanced algorithms to build optimal schedules, which can create significant operational savings and better shifts for operators. Some of the software that creates these scenarios takes hours to run one optimization, making compliance complex, or requiring extensive changes to the software.

In fact, adding meal and rest breaks can run the risk of “breaking” historical schedules, resulting in two choices: non-compliance with the law since the crew schedule won’t provide the required breaks, or a schedule which requires too many drivers or has other issues, such as too many split shifts.

One of the unique challenges associated with the ERA break rules was that they are highly specific with regards to the timing and length of the breaks (at least in case there is no other agreement in place between the employer and employees), as you can see below: 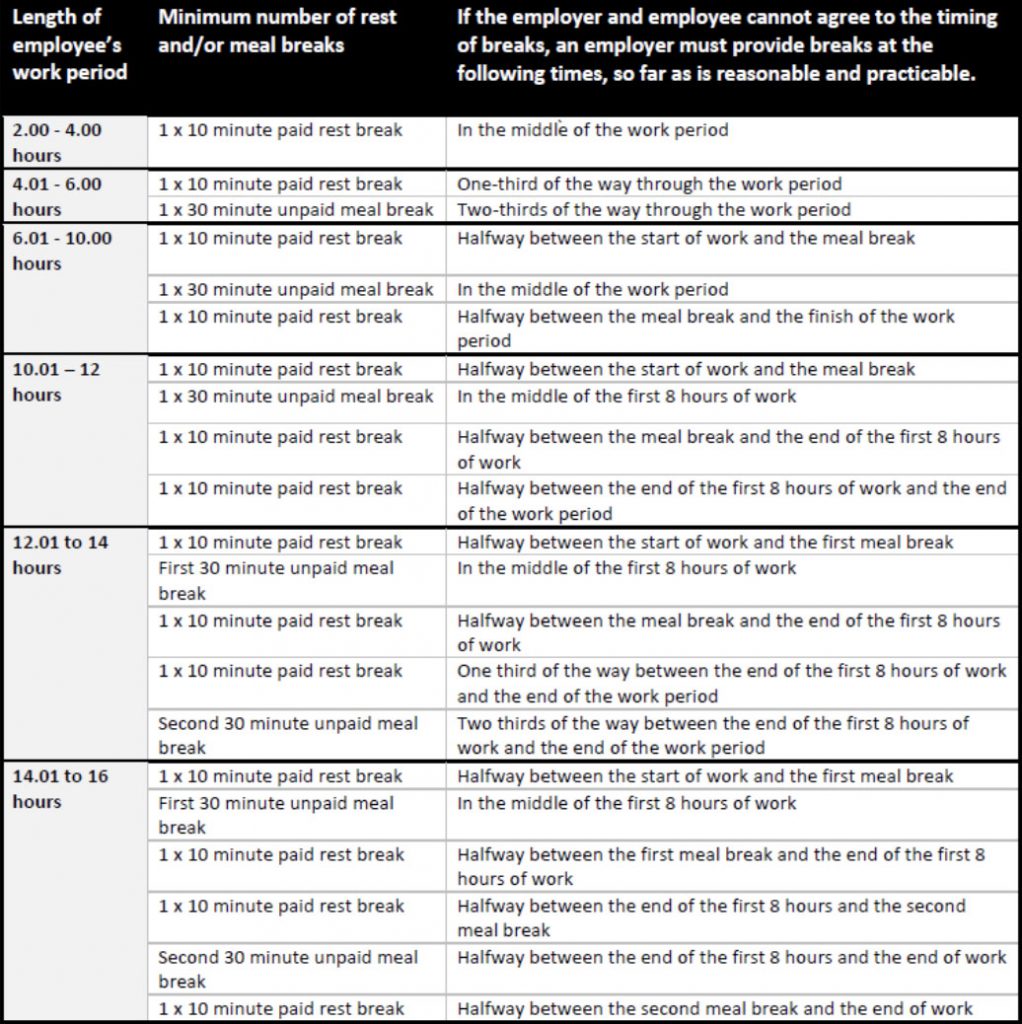 As you can see above, the rules indicate both the length and the timing of the break at a high degree of specificity. Timing in this can is complex, since the breaks are taken relatively to the length of the shift or the last break, as opposed to a simpler statement such as “every three hours”.

Let’s look at what implementing the ERA would do to a given (theoretical) schedule, and then see how we can implement a series of iterations to arrive at a schedule that is both optimized and complies with the ERA. This is important in the context of negotiating with the union, since potential variations on the ERA can be quickly modelled, so that both parties can discover a win-win variation on the ERA that would service efficiency and driver comfort.

Originally, the schedule is not compliant with the ERA, and requires 120 duties. Extensive manual-only scheduling created a 135 duty schedule, but about 25% of the duties were in violation of the ERA. Our goal is to see whether software can do a better job…
Let’s see what compliance with the ERA will bring. This will be accomplished by a series of steps, as follows:

Next-generation scheduling and planning platform apply algorithms together with an easy to use interface to quickly deliver responses to scheduling and compliance needs, balancing compliance and employee well being with the financial and operational efficiency that is required.