How to Adapt to Changing Paradigms and Priorities: Drivers

The shortage of bus drivers is a major concern for the public transportation industry, especially in Western countries. In a recent Optibus poll, more than half of industry professionals said it is by far today’s most significant challenge.

Optibus and industry leaders discussed how the industry can evolve, what should be left behind, and what new strategies and ways of thinking we should adopt in order to improve driver work conditions and reduce absenteeism. The main suggestions were:

The ideas were diverse, but the message was clear: resolving driver shortages is an industry-wide effort that will require agencies and operators to address larger, systemic problems and the nature of driving jobs themselves.

Long hours and insufficient downtime exhausts drivers, affecting their work performance and mental health in a way that compromises workplace safety, quality of service, and recruitment and retention efforts.. Sometimes, the problem is invisible: a Transport for London study revealed that fatigue and sleepiness are rarely discussed between or reported by drivers for fear of being disciplined. When employees do not blow the whistle on fatigue, employers cannot respond properly, if at all.

“I think it’s hugely important that we recognize the risk that’s linked with mental fatigue,” said Carla Stockton–Jones, UK Managing Director at Stagecoach, the largest bus and coach operator in the United Kingdom.

“It has a direct impact on a person’s wider health, as well as work, and we know that it’s caused by a variety of issues: insufficient rest, not enough sleep, or not enough good sleep, prolonged working, and that repetitive task that is associated with driving buses. So I think first of all, we have to recognize it, but secondly, we have to help them manage that,” she continued.

To address the issue, Stagecoach runs a fatigue risk management system composed of core representatives across the workforce, including union representatives.  The system enables Stagecoach to constantly review their response to fatigue, set objectives for improvement, and measure their progress in response to the issues. Stagecoach also conducts fatigue awareness training to help people understand the impact of fatigue on their work performance.

Carla emphasized the importance of recognizing how different shift patterns trigger fatigue and the need to set up “a constructive and trusting environment where they can come in and talk about that.”

“We have to help managers, supervisors and those other key workers in our business understand the importance of a discussion around fatigue and what people should be doing and how we help them,” said Carla.

Dave Joshua, General Manager, EMEA, Optibus, agreed that a special effort must be made to encourage discussion, noting, “You can’t just ask someone ‘Are you tired?’ because most likely, they’ll say ‘I’m okay.’”

To Judy Rodriguez, Director of Transportation at the Western Reserve Transit Authority (WRTA), simplifying the professional path to becoming a driver would open more doorways into the profession.

WRTA partners with a local college in their operational base of Ohio to provide a commercial driver’s license (CDL) class that helps people get the credentials needed to work as a bus driver. Judy noted that in February 2022, another component was added to the CDL, which exacerbates the shortages by making it more difficult for potential employees to enter the profession.

“So not only do we have shortages, but people are iffy about getting a license now because they are making it harder here,” Judy explained.

The U.S. Bureau of Labor Statistics estimates that the job outlook for passenger vehicle drivers in the United States will increase 25% between 2020-2030, faster than the average rate of growth for all occupations. When you factor in the number of workers who will exit the workforce, such as through retirement or changes in career and industry, that breaks down to about 134,800 openings each year over the decade. That number greatly overshadows the number of incoming students that Judy has seen recently.

“We’ve been hiring for over a year. I have classes of one operator at a time. That’s the best I can do right now. So here it’s very hard,” she added.

Some drivers are leaving for higher-paying jobs in delivery services and trucking. Signing bonuses and raises are one counter method coming from the passenger transportation industry, but these have yet to prove effective.

“Higher pay alone won't solve the problem" was one of the key answers from Sergio Soares, CEO of Transdev, Portugal and Spain. Sergio believes that younger people are less interested in pursuing a career as a driver due to evolving lifestyle preferences and new views about career paths. Financial incentives won’t be enough to convince them to become drivers for the long-term.

Judy noted that financial incentives do not compensate for undesirable work hours, which are at the core of recruitment and retention challenges. People want a life outside of work, she explained. “They just want eight hours. No one wants to work twelve hours a day.”

The public transportation industry must find a way to distinguish their driver jobs from those of other sectors.

Both Judy and Carla agreed that good work shifts are more important to drivers than signing bonuses.

“No one wants to work early in the morning and then come back at night and their whole life is spent at work every single day,” said Judy. She proposes that the industry take a closer look at schedules. “Is there any way we can do something like eight to four thirty? I know we start early in the morning, but maybe, if you start at five, you’re done at twelve. Something to get them out early and separate their worlds.”

Carla believes that work flexibility is “the number one thing that people are looking for.”

“[If] you get flexibility right, you’re fixing an awful lot of problems,” she elaborated.

She encourages employers to let drivers choose their hours, and to create an environment where the operation can start to rely less on traditional, 40-hour per week workers.

“I’ve been told that it can’t be done, but I’ve seen it done in other industries and I’ve seen it really drive engagement [and] customer satisfaction,” Carla said.

“I can assure you that working in a warehouse, it’s not better than working on a bus,” said Sergio. “But in fact, the predictability of the schedules, the way they organize their lives, is very, very different from what we are seeing in our companies today. And it’s possible!”

Not only is it possible - Sergio believes that in some cases, these new driver schedules could be even more aligned with a city’s transportation needs. Of course, operators and agencies will need the “courage to go [through] with some major changes,” he noted. “But without that, we will not have drivers, so in any case, we have an obligation to change.”

To Sergio, part of the solution to recruitment and retention lies in facing the reality of a changing job market.

“We have an aging population and a kind of a generation gap,” said Sergio, who believes that younger people are less excited today about a career as a driver as they were in previous generations.

“I think it has a lot to do with what young people want from life and what a driver’s job can offer,” he elaborated.

Sergio listed extended work hours, unpredictable schedules, and the lack of improvements in working conditions as factors driving away younger members of the workforce.

Evolving expectations about work also impact retention. Judy of WRTA noted that when undesirable work conditions and a dying interest in the profession converged with the pandemic, the industry saw many drivers retire or quit because “they just didn’t want to do it anymore.”

Giving people a good reason to consider driving as a long-term profession will help fight today’s trend of people retiring out of the profession without new workers to replace them. 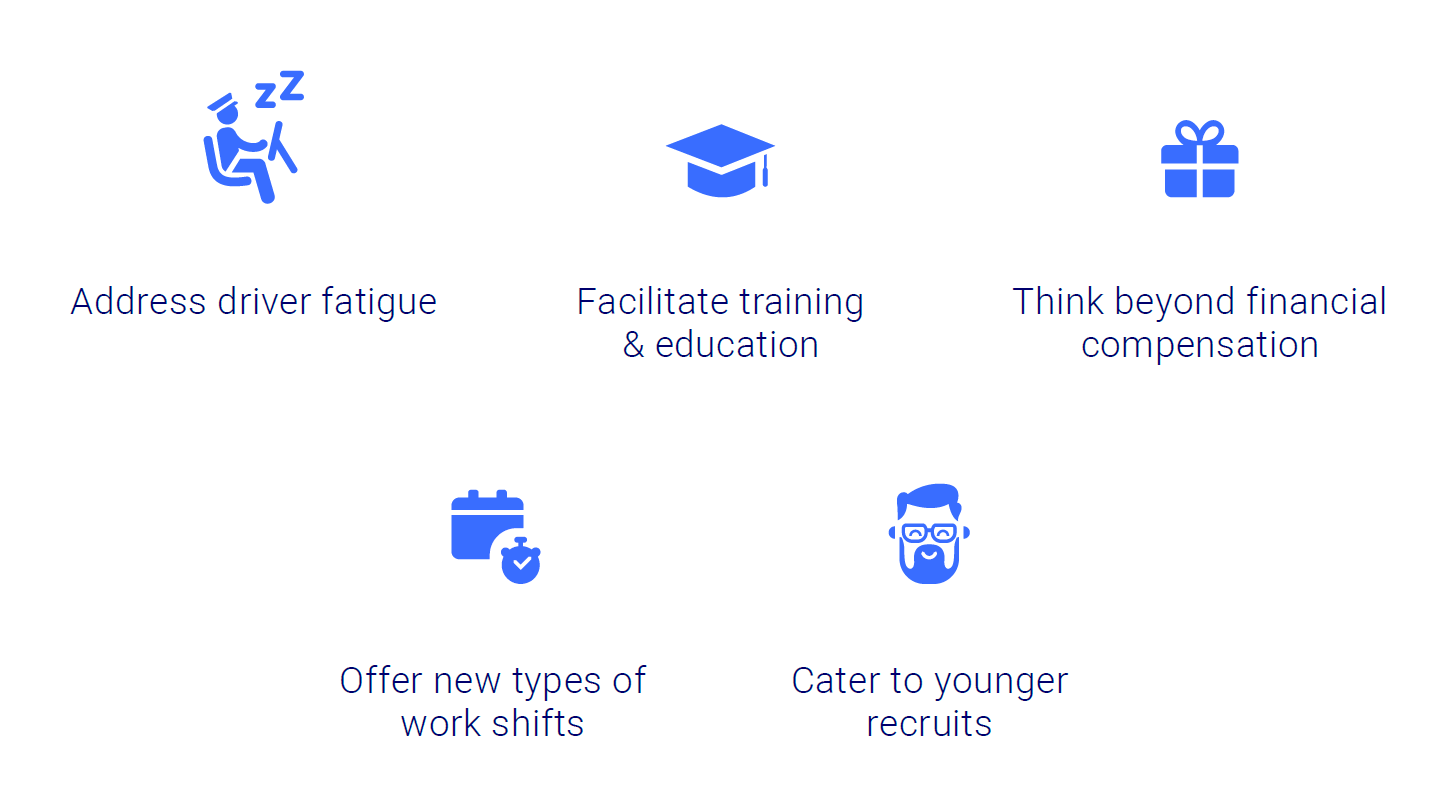 Improving the perception of and entry into the driving profession is a common global challenge. The public transportation industry should look at new, innovative ways to address this obstacle, such as those proposed throughout this e-book, and adopt the tools and frameworks needed to implement those solutions. Digital capabilities for better work shifts, fatigue management systems, and driver communication apps are part of an effective strategy.

New ways of thinking about and approaching driver challenges will make it easier and more desirable to be a driver. That helps to attract talent to the profession and make it possible for drivers to stay within the workforce longer. That is a win-win-win situation for drivers, passengers, and transportation operators.